It’s a small, fermented soybean-filled world after all! 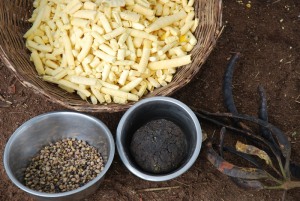 Materials and finished product for dawadawa or sumbala, a West African fermented bean product made from locust beans and, more recently, soy.

The Japanese are not the only ones to have discovered the secret of fermenting beans into something new and wonderful. Soybeans and the bacillus bacteria that turn them into natto are naturally occurring across Eurasia and beyond, and many cultures have developed their own versions of natto or something like it.

Local cuisines across Southeast Asia include variants on natto. Fermented soybean dishes include dou-che (China), pe-poke (Burma), kinema (India & Nepal), chongkuk-jang (Korea), thua-nao (Thailand), tua’si (Laos), turangbai (Meghalaya, northeast India), aakhuni (Nagaland, northeast India), hawaijar (Manipur, northeast India), and bekanthu (Mizoram, northeast India). Other cultures outside of Asia also prepare beans by similar methods; “dawadawa” is a traditional foodstuff in West Africa with a very similar production process to natto. The starter for many of these products is a different bacterium, Bacillus subtilis, but the resulting product is similar, though the way it is prepared and served varies widely. They may be savory or sweet, prepared as curries, fried in cakes, or used as an ingredient in other dishes. Indonesian tempeh is also widely regarded as a type of natto, but in this case the transforming agent not a bacillus bacterium, but a fungus called Rhizopus oligosporus. One might think of tempeh more like a soy-mushroom conglomerate than a true natto, and thus it’s been left off the list below. If you’re aware of any others, please let me know!

Here are some of the cousins of Japanese natto from A to Z:

A condiment made from fermented black soy and spices in the Nagaland province of northeast India.

A variety of natto found in India.

Very similar to traditional Japanese natto, bekanthu is made in the Mizoram province of northeast India by fermenting cooked soybeans in a wrapper of banana leaves inside a basket.

A Korean natto mixed with garlic and red chilis, often used as a condiment or an ingredient in soups. Also written as “dambuk-jang”, “joenkuk-jang” or “chungkukjung”.

Also known as “sumbala”, “oji”, “iru” or “netetou”, this is a traditional food of the Yoruba and Hausa of Nigeria and Ghana and other peoples of West Africa. Dawadawa or sumbala is made by cooking and fermenting locust beans (néré seeds) or, more recently, soybeans. The soaked and hulled beans are mashed and layered in calabash trays, then wrapped in layers of burlap to ferment. Once fermented, the resulting product is either shaped into small bowls-shaped molds for sale at market, sun-dried for long-term storage, or pounded into flour. It is usually used as an ingredient in porridges, soups and dumplings. Soy dawadawa is a relatively recent invention, as soybeans were not cultivated in West Africa until the 20th century.

Chinese fermented salty black soybeans, also written as “douche”, “dou tchi” or “dou-shi”, among other spellings. This is a widely popular ingredient in Chinese cuisine, and would be familiar to many Americans as the key ingredient of black bean sauce. Chinese douchi is very similar to Japanese “temple natto” such as hamanatto or tera natto.

Fermented soy widely consumed in Manipur, northeast India. Similar to other Indian versions of natto, it is fried with various spices or mixed with fermented fish to create a piquant condiment. Hawaijar may also be served as a pickle.

The Himalayan version of fermented soybeans, most common in the Sikkim region and eastern Nepal. It is traditionally made with black or yellow soybeans. The beans are soaked and boiled, then fermented in bamboo basket lined with ferns or banana leaves. Sometimes wood ashes are scattered over the basket, and it is often hung in a jute bag in a warm place to ferment. It is typically served as a curry or soup. Kinema is often dried for long-term storage, and may also be ground for use as flour, or as a seasoning in other dishes. Kinema production is typically small-scale, and methods for making it are traditionally passed down from mother to daughter. Women in eastern Nepal occasionally earn extra income by cottage production of kinema.

Burmese foodstuff made with fermented soy, rolled into flat, round cakes which are dried, then later fried or baked. The Shan cuisine of Burma in particular uses fermented soybeans as a key ingredient, and in addition to flat cakes, whole bean natto is often fried with garlic and chilis and used as a seasoning. The name of this food may also be written as “pe pote” or “pè bohk”. In recent years, some Burmese cooks have taken to simply frying commercial natto imported from Japan. 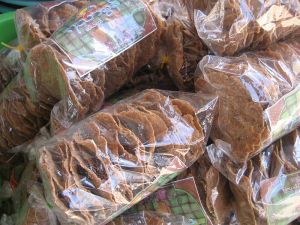 A Southeast Asian natto made by fermenting cooked soybeans in a bamboo basket lined with banana leaves. The resulting product is typically mashed with spices, then steamed or baked before serving. To extend the life of this food, the raw paste it is often shaped into cones and dried in the sun, after which it can be stored for several months. Also written tua’nao, tua nao.

One thought on “Natto’s International Cousins”